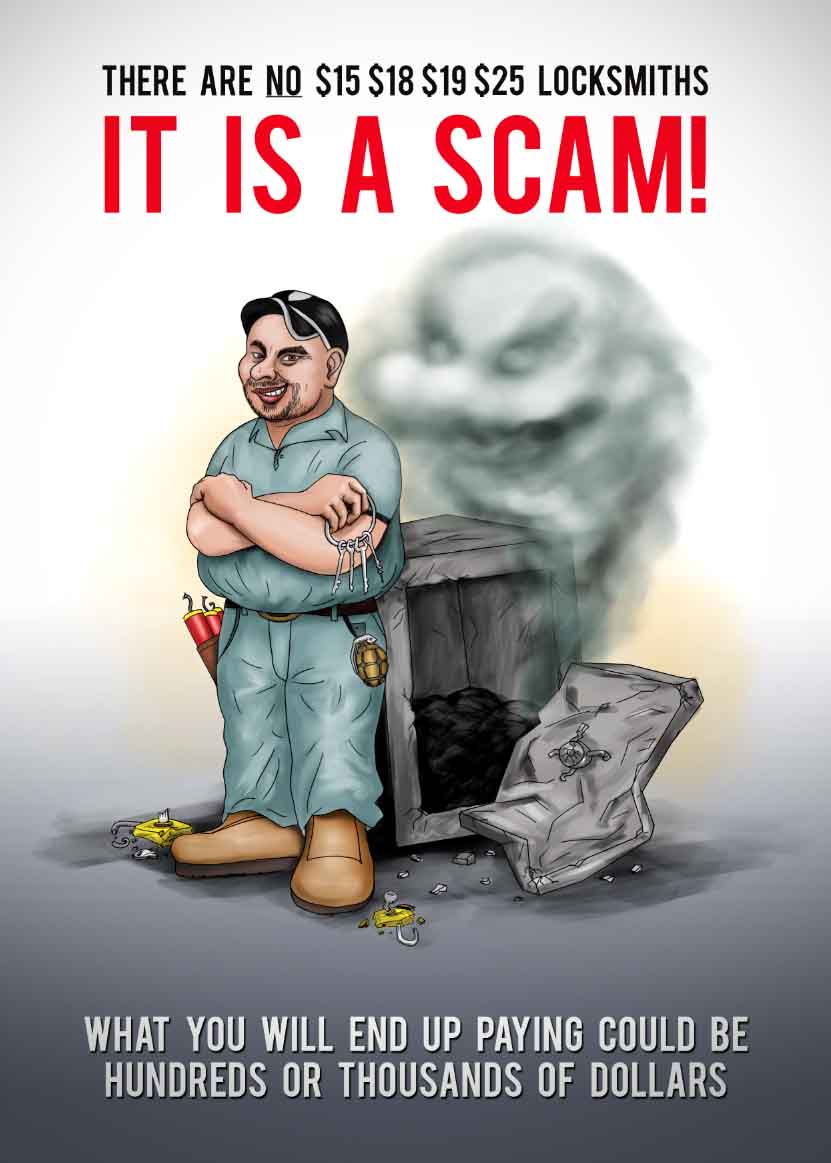 A Wise Accountant Seizes Locksmith Calgary, who refuses to fall for their scam | Mr. Locksmith Blog

Day-in and day-out, we hear horror stories from our customers who almost got scammed by a scammer locksmith. Unfortunately, many times, people fall for the scams of these criminals.

Today, a very smart Calgary accountant did what we suggest everyone to do, think and refuse to pay. Mariya Savchyshyn owns a condo in Calgary and rents it out. She said her tenants asked her to replace their lock, and a Google search listed Locksmith Calgary at the top, so she called them without doing her searches to see that they are a scammer locksmith.

Tips from Terry Whin-Yates on spotting a locksmith scammer

Finding out if a locksmith company is a scam is quite easy, here are a few simple steps from Terry Whin-Yates to catch them.

There are many more warning signs to catch a scammer locksmith. Just use your head and if you can’t determine if they’re fake or not, don’t use them!

One big warning sign which Mariya Savchyshyn should have caught onto was the fact that the scammer locksmith, Locksmith Calgary used the tenant’s phone to phone her. Why wouldn’t they use their own cell number? Because these scammer locksmith’s do not want repeat customers.

Scammer locksmiths such as locksmith Calgary operate on a one-hit basis. They scam you, and then they request an extreme amount of money and force you to pay. Because of the bad experience they provide, they don’t expect you to call back which is why they provide an illegitimate invoice with a fraudulent tax ID, a fake address and at often times as well, a fake phone number.

Thankfully, when the scammer locksmith called Mariya Savchyshyn to say that he’s done, she caught on. Locksmith Calgary refused to provide an itemized invoice for the inflated invoice which was triple the cost, $773.85 as per CBC.

“And I’m like, that’s weird, because usually the customer has to receive an invoice, look at it and then pay, right?” said Savchyshyn.

“I’m an accountant myself, and I know that no one is going to send me money until they see the invoice.”

When Savchyshyn refused to pay without knowing exactly what she was paying for — she says the company threatened to send the bill to a collection agency.

“I just want to warn people because someone … might be scared because that company is scaring people by saying they’ll send them to collections,” she said.

“Locksmith Calgary told CBC Calgary they don’t provide a billing service, even for larger companies, and require all payments be made before an invoice is issued.”

This should be an immediate red flag. No legitimate company issues an invoice after payment. We, for example always issue an itemized invoice before the customer pays, because that’s the correct way of doing business. If a customer has a question, we’re always there to answer that question.

“On their website, Locksmith Calgary lists their service call fee as $15 plus labour and hardware costs. A lock change is listed as $35 dollars and a lock re-key as $19.” “While speaking with CBC Calgary, Locksmith Calgary couldn’t say why the bill was so high, but said they’d since agreed to lower it to $300.”

Shouldn’t a company know their invoices? This is a trick that scammer locksmiths like locksmith Calgary do. When approached by authorities or by a large media outlet like CBC Calgary, they start acting stupid. Mariya Savchyshyn should still dispute the charges with her credit card company and get the full sum back.

We’ve baited the scammer locksmiths before with the help of the media. Check out Terry Whin-Yates collaboration with CTV News with our undercover investigation on locksmith scammers.

“And up,” said the locksmith, “It depends on the lock.”

“No, it’s not easy. Five pins, medium security,” he explains.

The locksmith showed McLaughlin his security license, which showed he’s a locksmith under supervision and then he called his boss.

“Why are you charging so much?” McLaughlin asked into the phone.

“It’s none of your business,” said the boss.

Here’s the thing about scammer locksmiths. They utilize a central call centre for lead generation services. When you call a scammer locksmith like locksmith Calgary, you’re not dealing with the actual locksmith that’s coming out to service your lock. These scammers pay these call centres around 20% for the lead and taking the call. While these people may seem to be pleasant , don’t be fooled! They’re not the ones coming out to work on your lock.

For Locksmith Franchise and Licensing Opportunities go to http://mrlocksmith.com/locksmithfranchise-opportunities/

Bike Lock vs Cordless Grinder | Mr. Locksmith™ Locksmith Courses and How to Pick Locks: http://mrlocksmithtraining.com/ How to Make Keys to...