For more information on Electronic Locks go to Keyless Locks.

So the Weiser Powerbolt. And I don’t know if it is a good lock or bad lock, I’ll say that upfront. The reason the customer had problems was, the battery went dead. So the battery was dead on their Weiser bolt. So we got instructions, installation thing, little skinny little keypad, box of stuff. You know, the inside is not so small. Instructions is what’s in this should be the bolt. So, we have the bolt, this is if you wanna convert it to a drive-in latch. And we have a strike plate for the edge of the door, another plate, and our screws.

Now this is different than a lot of the newer locks, we call it the D, this is still using the, just the little slot there. So the bolt is using just the slot. So it’s not your typical D, D latch on this one. And it’s adjustable. So it goes from 2 3/8″ to 2 3/4″ backset

You remember, does this say top? It doesn’t have top on it. Remember we call it Mickey mouse ears, the ears go on top. So that’s the top and it’s adjustable 2 3/8″ to 2 3/4″ backset. There is a different bolt than they have in there, in their other locks, more of an old, old style, but it’s still different. Oh, there’s the tailpiece, I said bits and pieces inside plate. Let’s see how it goes on. Okay. It’s got long screws, short screws, different thicks of doors. Takes four AA batteries and no batteries supplied. It didn’t say that on the box, Where are my batteries? Okay. I’ll just grab some batteries.

I got lots of batteries. Remember as locksmiths, always carry lots of fresh batteries. So here are no batteries, no big deal. We will play with that. Let’s throw in some width screws, to there. Remember, don’t crank these in all the way. It’s, we just want them snug. That’s all. That appears to go under. And, the cord from the exterior to the interior goes under the bolt, goes into the lower part and we’re gonna use the slightly longer screws. Okay. So that looks good. That’s not crimped. Here we go. Now, this is the interesting part. It says just fit that in there. Okay. Just fits in. Okay. Where does it go?

We’ve got that into there. So there’s nothing on the exterior of the tailpiece to activate the deadbolt, just slips in. Then we take the power supply or hook up the cable. Let’s get going, see if it fits. One of the big problems you have to have with all these locks is, do not crimp the cables, cause that’s a pain in the butt. So we have machine screws. Remember, use machine screws don’t use wood screws. I always have lots of batteries.

The lock requires four (4) double-A batteries. Ooh, it’s happy. So right off the bat, I’ve always found these kinds of hard, if you’re doing the manually, it’s the, you think, I haven’t. The first time I installed the early, early versions of the Powerbolt, I thought I installed it wrong cause it was so hard turning that thumb turn. But that is normal. It’s not like a normal kind of lock. You don’t even feel the deadbolt going out, to the bolt itself, going out all the way. But it is going all the way. So, right off the bat that’s kind of hard, but not too hard.

Okay. I had to pull up the instructions. I can see why people hate these things. So from the inside, I have to hit the program since the programming button is on the inside. Hence, you gotta be inside already to get this. There are different instructions for the left and the right. So this is left. Hit program. Two beeps. you must Press one-two. then Press program again. I will hear one short beep. Now press in a four to eight-digit code. Didn’t like the last one, let’s do this. And then, press the program again. Now we hear one long beep. Okay. Let’s lock it. It locks. It unlocks. Lock it. Okay. Unlock it. Let’s see if it’ll handle another user code.

It said three beeps, if you hear three beeps, it was unsuccessful. You know why you probably didn’t like the one-two, because this is left, by their, by there, this is a left. They call it a left walking latch. Well, that’s a bolt visor. It’s called a deadbolt. So it’s a left locking latch as per their instructions. So will, does not like the one two number, but it does like. Like that number. Lock again. And it likes That number. So if it’s a programming number, it doesn’t like that. So the other programming number, if it was the other way around, let’s see if it just locks that one out. Five six is considered a lock code number. So let’s just lock it. So we’re gonna program.

Press one-two, then press program again. Well, It liked that. Let’s try the number. Okay. So, because this is a, if I had to program it from original to a right hand, it won’t take one-two. But if I program it from here, it will take that as a programming code. Let’s just try one more programming code. So let’s just lock it. That’s it. Program. One two. Program. Didn’t like that, three beeps means wrong. The box and the instructions, I just took a quick look at it. I, it, I had to look at how many user codes of this handle. I had to go to the website to look it up and it will hold four user codes. They can be between, four or eight-digit, four to eight digits, whatever. So they don’t tell you that.

So it only holds four user codes. The instructions are poor. But we do know that if I, in theory, let’s try this. If I punch in, three times wrong, I’m locked out for 60 seconds. So if somebody is playing with it, gets locked out. Now I wonder, let’s try a proper code. Now it won’t let me try anything. What if I lock it and unlock it? No. It’s still locking us out for 60 seconds. Some of the locks, if you lock it, unlock it from the inside. So four user codes, 60-second lockout, if you do it three times in a row wrong. 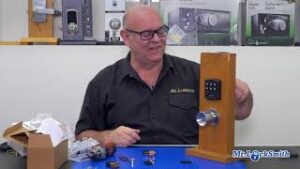 This is a fresh battery. It’s a Duracell. It’s one we use all the time. Right under the nameplate is, cause there’s no key override so you locked out of this. There we go. Stick my battery on here. Okay. It seems to have a rear proper wedge, a little plus or minus but we can figure this out. Okay? Okay. So it does take, plus goes on that side. This is why I have boxes of smart key locks, smart locks. I got boxes of broken ones, because out of the box. Okay, we’re gonna, this is a fresh nine-volt.

Let’s grab another one. This is out of my alarm kit. So, these are good batteries. So we know we have the plus goes to here. Oh, don’t leave it, leave it running, leave it running. I find this fascinating. My, my camera guy is not liking this, but no no, keep it running. Let’s see. Okay. Just hooked up the battery. Okay. Okay. This is a real test here. So let’s lock it. Let’s disconnect all the, let’s just pretend the batteries are dead, I will disconnect them.

I remove all the batteries the lock is dead. We are locked out. You go there as per the instructions. I take my battery, nothing with that one. This one. Okay. Likes that one. Just in case, here you hold that. press it. It says, wait until it makes a noise when its got the positive on this side. See. It’s crap. And this is why the customers are locked out.

We had, we tried everything. I bought one out of the box. You saw this. I went to the local Big Box Hardware Store. I bought this, hooked it up. Just like our customer had a problem. I could not get it open. I had my nine volts. He was sitting there with his nine volts. We did not, I didn’t wanna, we did not get it open with the battery pack. We did not get it open from the front. And I tried everything. And in the end, what did do? We drilled it off the door. Cause we only got one door going into the pool room. And it didn’t work for me. And I just thought, maybe it was a faulty lock.

It was, it didn’t work. I couldn’t use my batteries. I couldn’t get it to work. And the customer had batteries too. But a lot of times we go to a lockout, the customer’s batteries, we put in our batteries and the customer is using old batteries. And so the lockout, look at this right here in the shop, having fired a round, right out of the box. You saw it, didn’t work. If a Weiser sees this, cause they know I pick on their products a lot. Let’s put, let’s go to Home Depot together, or Rona or wherever you want.

Let’s buy one of these, right out of the store. Okay, we’ll go together and let’s do this. And let’s see if this works. Hey, one more time. Try the other battery. Seems to like that one. How’d you like to be? I am a locksmith. How’d you like to be a homeowner and this is what’s happening to you? And you call me up in the middle of the night, we come out here, sometimes we take our battery or whatever, we open it up.

I don’t feel so bad now. Crappy user instructions, crappy lock. We know it works with the batteries, four user codes, 60-second lockout. This is why I don’t sell this at all. Because of the problems. I ran around, we grabbed a few more nine volts, stole one out of my smoke detector, it still doesn’t work.

In conclusion, I would not recommend this lock and I can see why locksmiths. It must be. I dunno, who knows, but I can’t recommend this, but I can see why it’s, why do locksmiths love these locks, cause we’re going out at night and daytime, and we are opening these. I have a video on my training site on how to totally bypass this, but it does require you to drill the lock and it destroys the lock.

Hopefully, that customer has taken that lock back and got the warranty out of it, cause it doesn’t work. I hope you enjoyed watching this video. Subscribe to my channel. Also, visit my website and you can see what online locksmith training I have for beginners, intermediate and advanced, as well as my covert methods of entry and my non-destructive methods of entry.

Terry Whin-Yates is a 3rd Generation Locksmith with 35+ years of locksmith experience and a BA (Honors) in Criminology from Simon Fraser University. 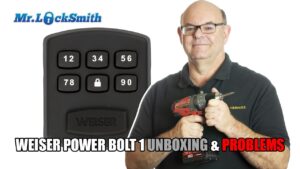